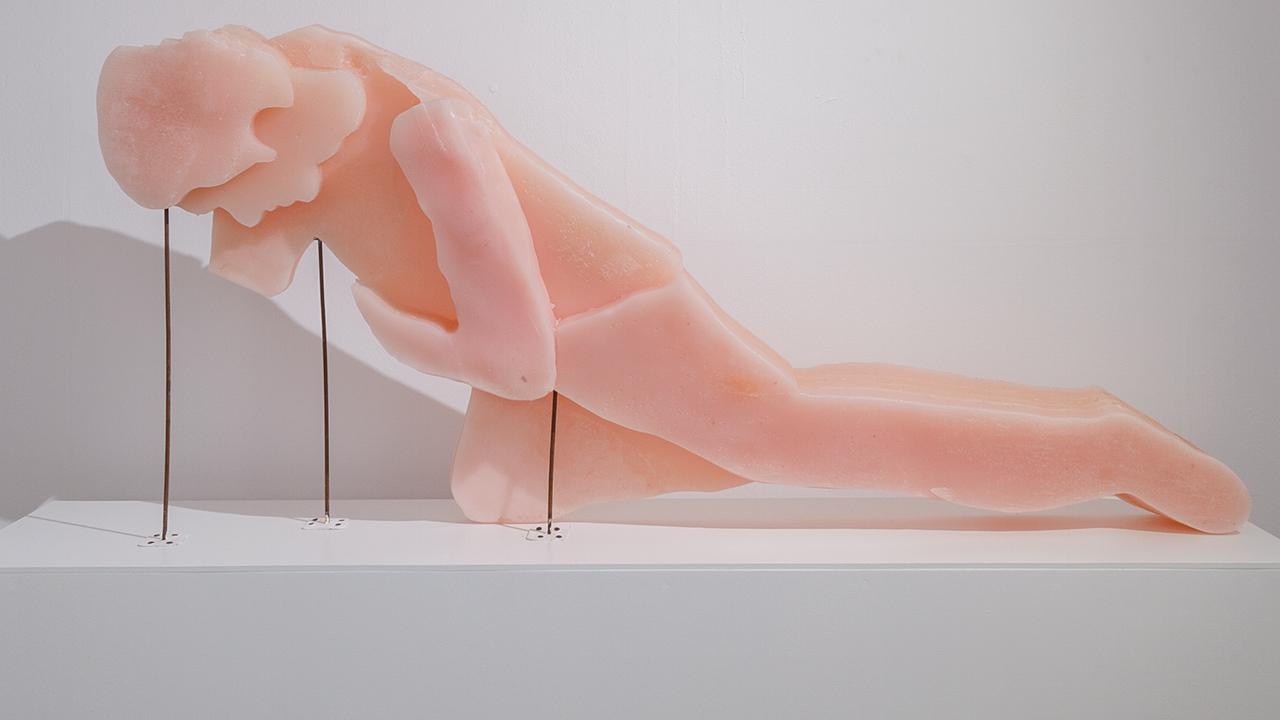 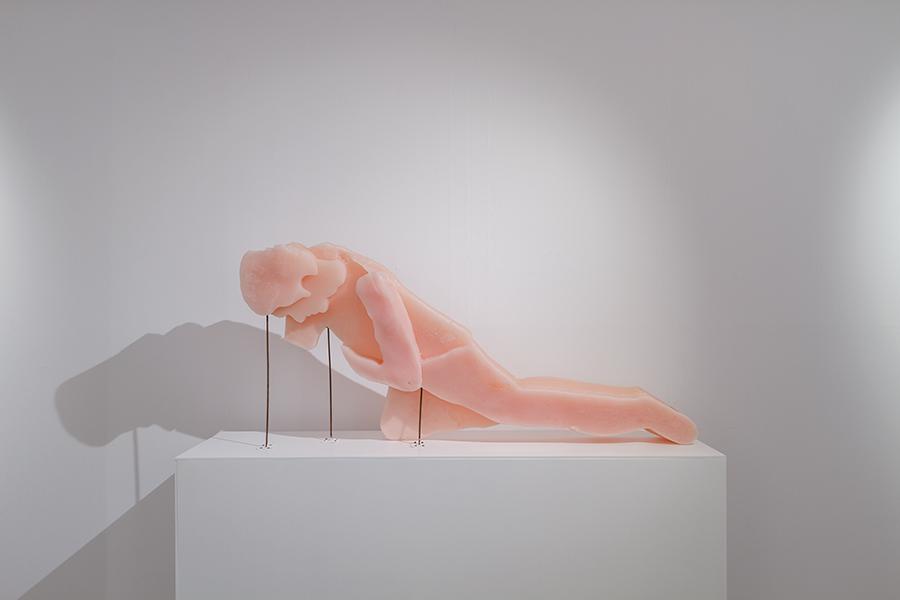 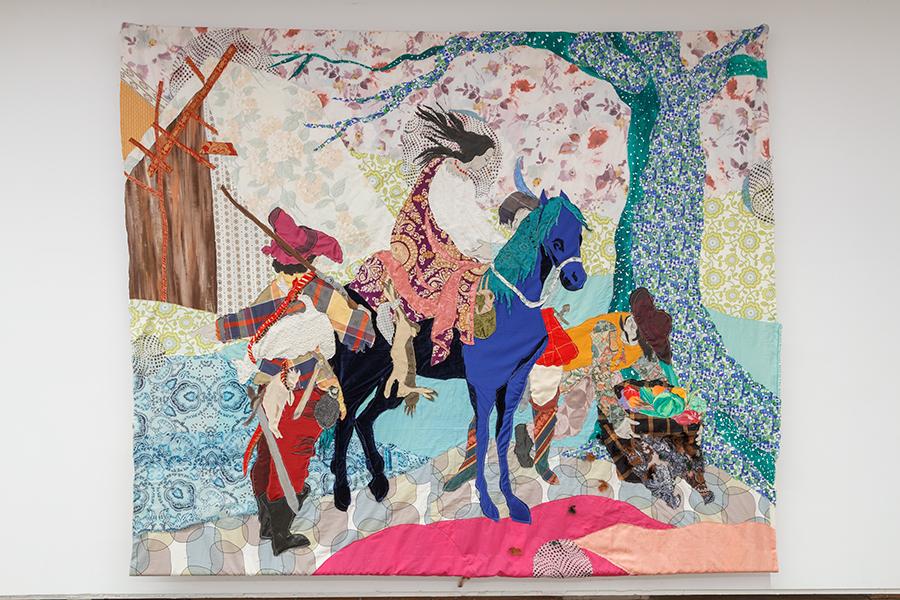 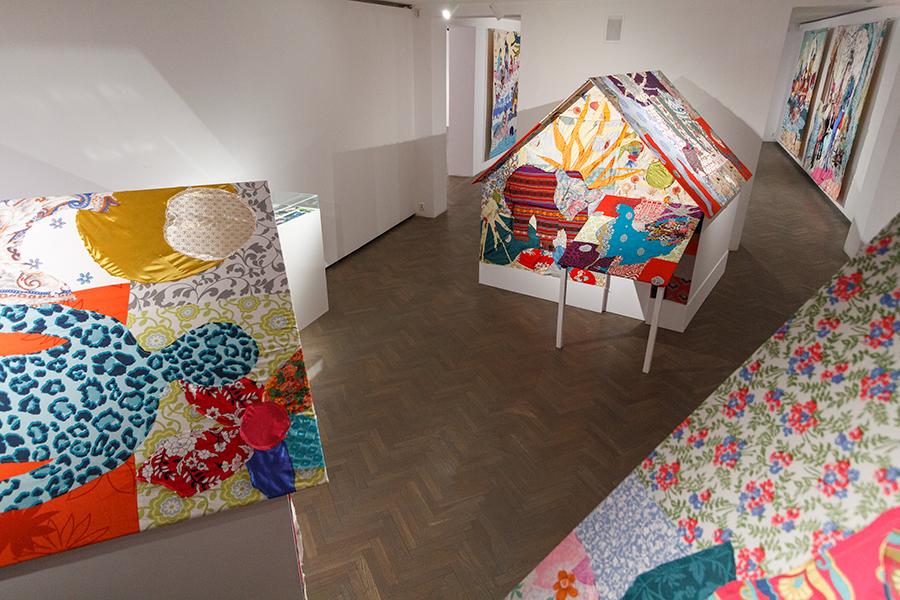 In 2011, in a forest in southern Poland, the artist Małgorzata Mirga-Tas erected Monument to the Memory of the Holocaust of the Romani – a wooden sculpture commemorating the 29 Roma murdered on that spot by German soldiers and the so-called Polish Police of the General Government in 1942 – a fraction of the estimated 500,000 murdered during World War II. In 2016, the work was vandalized, leaving the figures – one captured wounded, mid-fall; the other, a kneeling woman – shattered. The artist remade the monument several months later to the same design. Then, from the mutilated remains of the original, she created the series ‘29’ (2018–20), currently on display as part of ‘Out of Egypt’, her solo show at Galeria Arsenal in Bialystok.

A Bergitka Roma, Mirga-Tas lives in a settlement in Czarna Góra, in the Carpathian Mountains, where she also works as an educator and activist. One of three series on view, ‘29’ drives this point home: cast in powder-pink wax, resembling slabs of marble or soap, the remnants of the debased sculpture form a constellation surrounding the viewer, resting on walls and plinths at different heights. The artist thus shifts the emphasis from commemorating the cruel event of World War II to that more recent act of violence. In a country faced with a mono-ethnicity crisis, and first presented in a city that used to pride itself on its cultural diversity – where the Roma feature in song lyrics of the disco polo genre as token figures of a nomadic lifestyle, poverty and beauty – ‘29’ speaks of more victims than the number implied in its title.

Mirga-Tas is drawn to the origins of such narratives but her approach is critical rather than nostalgic. In her most recent work, ‘Out of Egypt’ (2021), she juxtaposes a series of early-17th-century etchings with her own large-scale embroidered renderings of the same scenes created with objects and textiles used or worn by members of her community. The work’s point of departure is French draughtsman and printmaker Jacques Callot’s Le Bohémiens, also known as Les Égyptiens and La Vie Errante des Bohémiens, (The Gypsies, The Egyptians, The Wandering Lives of Gypsies – a telling string of titles) in which the Roma are cast as Europe’s exotic other: wanderers in oriental attire whose homeland was then associated with Egypt. In Mirga-Tas’s five scenes, hung loosely from the walls, the fine monochrome lines are supplanted by vivid patchworks of patterned fabric, while the oriental costumes of Callot’s depictions give way to the physical presence of contemporary Roma outfits, thus detaching the images from the confines of historical convention.

This critical tension between the objectification and lived experience of Roma culture is a recurring motif for Mirga-Tas. For her series ‘Wesiune thana’ (Place in the Woods, 2016–20), originally conceived as an installation for an open-air heritage museum in Nowy Sącz, the artist employed sheets of colourful fabric and string to transform a cluster of houses in a remote area of the museum, highlighting the spatial layout and power relations of historical Roma settlements situated on the margins of towns and villages.

Drawing on history, anthropology and art history, Mirga-Tas deploys the strategies of reappropriation and upcycling to lay bare the mechanisms that are at the root of much popular thinking about the Roma in Poland and beyond. By reclaiming the voice of her community, Mirga-Tas speaks to the shifting social landscape of Europe, both past and present.